What are Top 10 Common Hacking Techniques 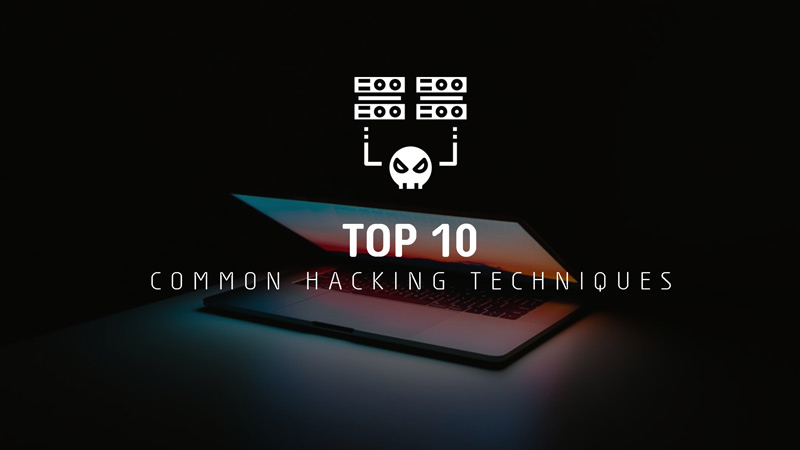 What Are Top 10 Common Hacking Techniques?

There are lots of hacking techniques out there, some of which are more common than others. But the thing you have to keep in mind is that lots of hackers come up with new and inventive ways to access your data. Which is why you need to find out how those hacking techniques work and how you can access them or make the most out of this.

The keylogger is very easy to understand. What it does is it records the key sequence and key strokes. It will automatically send a report with all the keys you pressed and that will allow the hacker to access all your passwords and stuff. It’s also one of the reasons why banks added virtual keyboards. This way it’s a lot easier to avoid any potential data theft. The keyloggers are actually quite common, and you do need to find a way to eliminate them naturally.

DDoS attacks are taking down a server or site simply by flooding it with a lot of traffic. The idea is that the server will have to deal with a ton of requests, and that on its own can be a major problem. In order to make this attacks work adequately, the hackers will use zombie computers or botnets. Every year there are new methods used to perform DOS or DDoS attacks.

The waterhole attacks will basically target the most accessed physical location. They will create a fake access point and they will modify the most visited site and redirect you so they can get to your personal information. Usually this is easier to deal with if you follow some security practices and just keep your software up to date if you can.

Wireless access points are the easiest place where hackers can get you very fast. They create a fake access point and once you are connected there, they will access your data without that much of a problem. The issue is that they can easily create a fake WAP with a legitimate name. That’s scary, because they can get just about all the information they want about you. One of the best ways to deal with such a problem is definitely the use of a good VPN. If you use a VPN, the chances of having them get you with this kind stuff are diminished, so try to take that into consideration.

While this attack doesn’t necessarily harm the system directly, it’s still bad. The idea is that they will listen to what you do on your computer, which is just as bad as attacking it. They will target your browser, email, messaging services and so on. Agencies and black hat hackers tend to be the ones that do such a thing. It’s quite common because it doesn’t steal any info, but it does provide unacceptable access to this kind of stuff. And that’s maybe the best and most important aspect that you have to take into consideration.

When a hacker uses phishing, he usually replicates a very popular site with the idea of making the user sign in and use his credentials in there. The hacked information will be used on the fake site and that will obviously be a great option to keep in mind. It’s a good idea to just avoid these messages. You can see if it’s an attack or not simply by checking the e-mail address that sent you all of that. Once you check it all out, you will have no problem obtaining some great results and the experience can be among some of the best out there.

These are malicious programs that get installed on the victim system and they will send your data to the hacker. Depending on the situation, the maleficent software will also lock your files, sniff data, divert traffic and so on. Most of the time this software also tries to spread on your computer and the entire network. So even if it doesn’t feel or seem like much, it can be very problematic and that’s why you want to avoid it as much as you can to stay away from any possible problems.

Clickjacking hides the actual UI and that means it replaces all of that with ads or anything else that can be monetized. The clicks are monetized and that’s a cruel way to make the user click just to find his own stuff in the interface. It’s actually not that common when compared to the other attacks out there, but it’s one unique and distinct thing to consider, one that you will have to deal with quite often and you should totally check it out if you can.

Cookies are used by websites to store data and load up faster. However, hackers know this and they want to access all this precious information so they can steal it faster than imagined. They will send IP packets that pass through the machine and they can do that usually if the site doesn’t have SSL. If it does, the process is way harder and many times they will just avoid that.

With this attack, the hackers buy advertising space on a site and they will direct people to a page that’s full of malware. They will make the ads very attractive so you click on them, and then the computer will be infected. It’s called bait and switch for a reason, because they bait you with good ads and then they will switch the site to infect your browser with malware.

Now that you know the most common hacking techniques, you have to avoid them as much as you can. Most of them are not that problematic, yet they can all damage your computer, OS or reputation in one way or the other. Try to avoid that and find the right solutions to avoid all these problems naturally!

A List of Pen Testing Tools The Professional Ethical Hackers Use