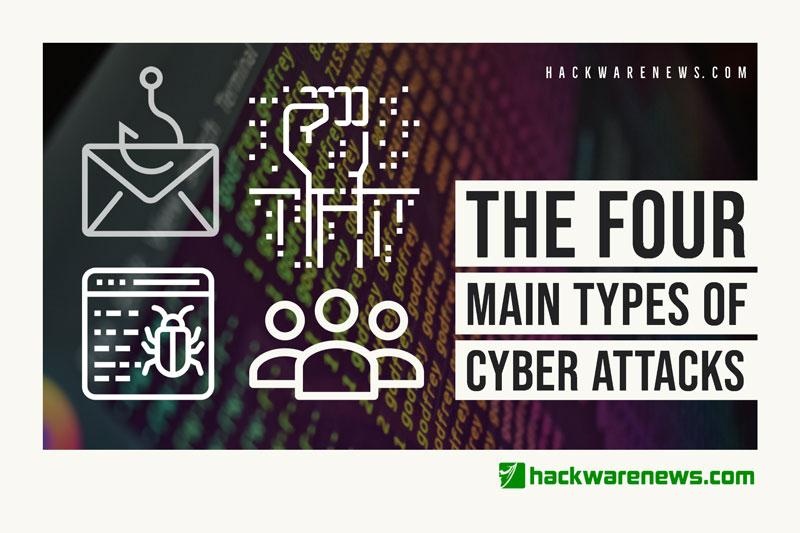 People should take cyber-attacks seriously as they can directly or indirectly affect daily life. There are many types of cyber-attacks, but there are four most common forms that everyone should be aware of. They are Phishing and Spear Phishing attacks, Malware attacks, Brute Force attacks and Credential Stuffing. Nowadays, all these attacks are mainly after your money, not just to damage your system. Awareness of these attacks will keep you from being victimized, which is becoming more and more common in this tightly connected world.

Phishing is what it sounds like. Cybercriminals will send convincing emails or short messages that lure unsuspecting victims into giving out important personal information. The stuff that companies and financial institutions use to validate your identity. These emails and messages are usually tailored to lure their targets. Victims are then directed to fake websites that look like the original and trick them into giving out the usernames and passwords as well as other personal information.

That information is then used by criminals to steal money or purchase other items on behalf of the victim. Phishing used to be easy to identify but are now becoming more sophisticated; that it takes some training for business users to avoid becoming victims. The term spear phishing is used for these more sophisticated and targeted attacks where cybercriminals conduct further research on their targets with some help of stolen data like email addresses and intercepted messages.

Criminals now engage in social engineering research in order to make their efforts more convincing. Simple ways of avoiding phishing attacks, is to check emails if they come from unknown sources. Users should hover their mouse pointers over links to see where it goes before clicking. And lastly, check their email headers to check for validity. Some email security programs will tag emails if they come from outside the organization.

The second most common form of cyberattack is malware. Malware is short for malicious software which include viruses, trojan horses, ransomware, adware and internet bots. Since it’s all about the money, most malware today will attack systems with the aim of getting monetary gains.

Ransomware is a form of malware that attack systems by encrypting important system files and data so they cannot be used. For the files to become usable, a message will prompt victims to pay the person responsible or the infected files will remain unusable or will be destroyed. Ransomware is often triggered by clicking on attachments from suspicious emails and it is unknown when these were triggered so backups may also be compromised, prompting organizations to make payments.

Viruses are a form of malware designed to behave like their biological counterparts, causing all sorts of damage while continuing to reproduce and spread throughout company networks. Trojans behave like spy programs wherein they provide cybercriminals points of entry in computer networks. Bad bots meanwhile small programs like viruses which spread throughout the network but are designed to steal computing power and network resources to be used for a specific purpose.

To avoid being victimized by ransomware and other malware such as viruses and trojans, it is important to avoid clicking or running email attachments unless they are from completely trusted sources. Security programs should also be in place and computer users should also be wary of USB sticks and SD cards found lying around.

In order to be protected from credential stuffing, users should enable multi-factor authentication which identifies users not just from their credentials but from other means such as a phone validation app or dynamic one-time passwords sent by website to user’s phones. Other methods include biometrics, and IP blacklisting.

Many websites and devices unfortunately still make use of unlimited logins. This means that users can try to connect in an unlimited number of tries. This is where brute force comes in; meaning that attackers can try getting into websites through brute force, by automating login attempts on specific usernames with unlimited password variations. Like trying to ram a door continuously until it opens.

In order to mitigate brute force attacks, users are encouraged to use long, sophisticated and hard-to-remember passwords that combine letters, numbers and special characters.

So, there you have it. Four forms of cyberattacks and how to avoid them. It’s important to take these seriously as computers have fully integrated into our modern lives. Cyberattacks are almost similar to being victimized by petty theft or home intrusions.