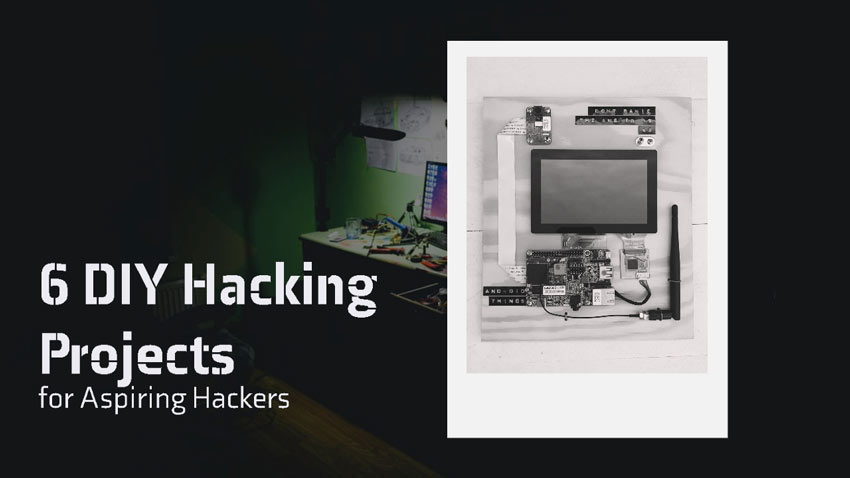 Testing your hacking skills with DIY hacking projects is a great way to see how deep your understanding of hacking is, and a way to strengthen your problem-solving skills. There is no “right way” to learn to hack, but some ways are better than others. Applying your knowledge to practical scenarios is one way to test your competency and improve your hacking skills.

Here we are going to give you some ideas for DIY hacking projects, but just be aware that we do not condone unethical hacking. You should test your skills on your own property and not someone else’s. Now the serious stuff is out of the way, let us have a look at some fun DIY hacking projects.

This exciting piece of DIY was first shown off at the Black Hat and Defcon security conferences in 2011. The creators, Mike Tassey, and Rich Perkins are an ex AirForce Official and a former airplane hobby shop owner but don’t let that put you off, it’s easier than you think to make yourself.

There’s definitely something extremely cool about your own personal spy drone, who wouldn’t want that? You get to build something cool and also test your hacking skills.

We passed telephone calls, hacked into networks, cracked the encryption on Wi-Fi access points all of that sort of evilness is possible,” said Tassey

If you want to build your own DIY UAV WASP you can find details on how to do so here.

This DIY Arduino TV annoyer allows you to turn TVs on and off as you please, annoying anyone watching them. The step by step instructions by Instructables have the parts at $1.50 (if you already have Arduino and the tools), but it looks like the instructions were compiled a number of years ago so expect the price to be a little higher.

You can disguise a Raspberry Pi device inside a standard power brick for a laptop.  The device will then create an SSH encrypted tunnel that would enable an attacker to send and receive data to the target network.

“I have this plugged into an office somewhere. It looks weird when you stare at it but put it behind a plant and nobody will ever notice it (except the guy who waters the plants).

Once I plugged it in I went back home. Right after the Pi got an IP address it created a tunnel to my home server. When I tried ssh’ing into port 2222 of my home server I was redirected to the Pi. Now I am on a computer in someone elses network. Woohoo! Now I can do remote tech support more effectively.”

You can find instructions on how to do this here.

You can modify an Airsoft rifle to pick up WiFi signals over long distances. Once a network has been detected you could crack your way in. The creator does have a word of warning about using the rifle in public:

This isn’t a real gun, it’s an airsoft rifle. And yes, pointing anything that looks like a gun at a person or building is a terrible idea, and yes this thing will freak people out and probably get you arrested. That’s why it’s never been outside my apartment, has never been aimed out my windows, and has an orange tip. Even with an orange tip, people probably won’t take kindly to “Oh don’t worry it doesn’t shoot bullets it just hacks into your WiFi”.

This one is definitely cool and fun, but may not be very practical in the real world, rather just a way to test your skills. For example, you could distance yourself from your house, attempt to find your network and then hack into that. Stay safe hacking enthusiasts.

You can find details on making your own here.

Turn a Safety Flare Gun Into a Wireless Camera Launcher

If you are the outdoorsy type who goes sailing or camping, you probably use flare guns for personal safety. Flare guns are great if you are lost or need to alert someone of your position to get help. If you have any spare flare guns lying around, then this may be the perfect hacking project for you.

This is another project that was showcased at Defcon security conference. The creator originally used a grenade launcher to fire the wireless camera, but then decided to use a flare gun so that the DIY tech was accessible to everyone.

You can find instructions on how to build your own here.

For this hack, you can turn a humble power strip into a stealthy Pi-Powered packet sniffer. For this project, you need a Raspberry Pi, a surge protector, a low profile SD card adapter, some cables, electrical tape, and a soldering iron.

You can find instructions on how to do this here.

There we have our list of 6 DIY hacking projects for you to get stuck into to.